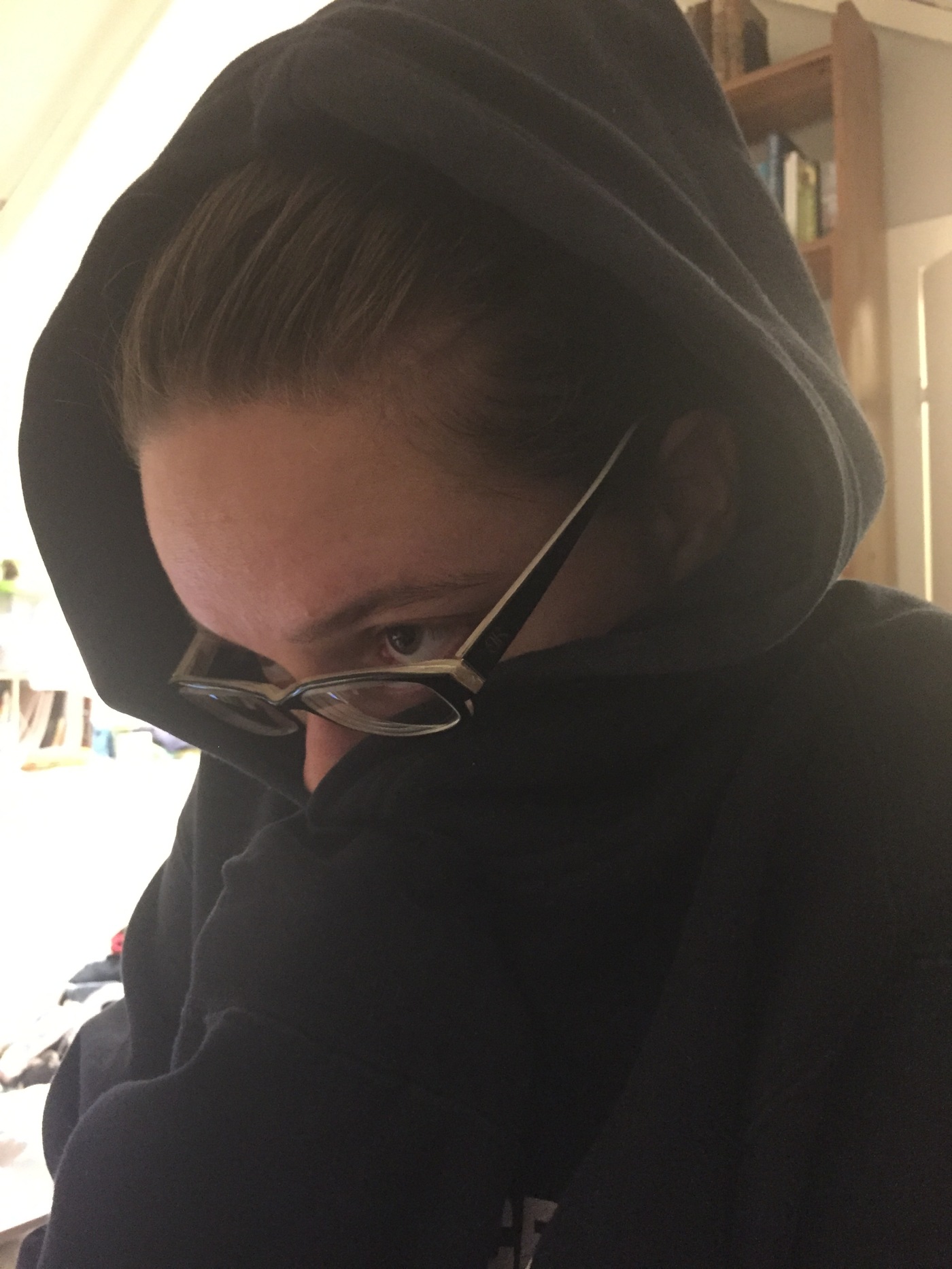 I’m not accustomed to this level of praise from anyone but my husband. My professor is holding out my short story to the rest of the class, my √++ a loud red against the white paper. It’s screaming, “loved it” almost literally, because that’s what he’s written next to my grade.

“Look at the format. This is what you need to do. The heading there, in MLA. And it’s six pages, so now what? She just has to hand in four more and BOOM! she’s done with her portfolio.”

I can’t make eye contact with anyone, barely even my friends. I don’t know if I’m smiling or just red and blotchy. If I am smiling, there’s a good chance it looks arrogant and cockeyed because I can’t tell if I’m pleased or I want to vomit because I’m embarrassed. I thrive on positive encouragement. In fact, I can take nearly any criticism if it comes with a dose of hopeful praise or a sincere, “I love you.” I just get it so rarely that when it comes, I don’t know how to handle it. Usually when he’s reading my stuff aloud, even if nobody knows it’s mine, I turtle. This is when I pull the neckline of my shirt up over my face so the tip of my nose is covered, and stare vacantly across the room at some lonely piece of dust. And for a moment…we are one. Sometimes I throw shade and do this when somebody else’s stuff is being read, just in case anyone’s watching and has caught on to my tell.

I read my story to the group, that’s how it goes for the stuff in workshop. It’s the first piece of prose I’ve handed in for Creative Writing. I wrote it early in the semester, but it took me weeks to convince myself to hand it in for critique. I’ve LITERALLY been having nightmares about this moment since I passed it out. The windowless basement classroom becomes the ninth circle of hell, my professor is Virgil, telling everyone my sins of shitty writing while my classmates chew on what’s left of my hopes and dreams, like Satan on the head of Judas Iscariot. The only reason I didn’t have to come into class with a large consoling cup of peppermint tea (a necessity for my Sci-fi/Fantasy Class) is because I sneaked a peek into his stack of papers and already knew he’d given me an A. *crosses herself and looks gratefully toward heaven*

Just him alone, I can swallow the negative critique. He’s published about 6 collections of poetry and, obviously, knows his stuff. If he says it sucks, I cry a lot, pick up the pieces, learn and grow. But for some reason the critique of my peers just scares the crap out of me. I mean, there’s so many of them, and just one me. And I’m thirty years old for crying out loud! Most of them are barely legal. How freakin’ sick would it be for me to burst into tears in front of them. (“Don’t mind me. I just paid all this money to find out I suck. Thanks for making my Mother right. Again…”)

I finish reading (badly) and he starts up again. More or less, he had nothing negative to say. Just a few suggestions and pointing out of silly mistakes. He praised my use of figurative language, dialogue, alliteration, and verbs. He said my story made him laugh every time he read it. He even praised things that I thought I did poorly. I was worried that my story wasn’t deep or thought provoking at all. I was worried that my characters weren’t dynamic. He mentioned these things, but not in a way that made it sound like it mattered, that somehow my story was still “really good.” He said my piece was excellently staged, “like it could be a scene from a movie. Great use of senses so you feel like it’s real. Like you’re really there.” That’s something about my writing I’m constantly worried about, that my setting isn’t visual enough to draw in the reader.

I’m shuffling and glowing and want him to stop and want him to never, ever stop. I mean, I adored him from the first day. But now? Gosh. He’s on his way to being one of my all time favorites. Honestly, I can’t tell you how much his praise was needed. I’ve had so many down points since the summer. I’ve been fighting and struggling to find my purpose, my gift, what it is I’m supposed to leave behind me. I’ve been told by so many people for so many years that I am this and that. I locked them out, but they are the forever recording in my brain that tells me, You are not enough. You are not enough.

But maybe I am. I’m not Tolkien. I’m not Sylvia Path or Donna Tart or David Mitchell. But I’m me. And maybe I am enough of me to be enough.

Do I think I’ve arrived? No way. I mean, this is INTRO to Creative Writing. Maybe next semester I’ll have a Prof who hates my stuff. Writing is a thing that you’re always learning how to do better, and I’m still so new at it. I know my novels need a ton more tweaking before I should try my hand at querying again. But at least now I have some concrete assurance that I don’t completely suck at this. And sometimes, that little something can be everything. 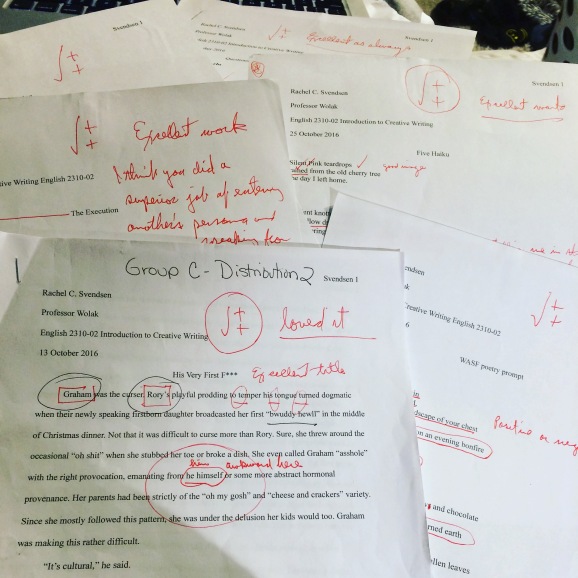