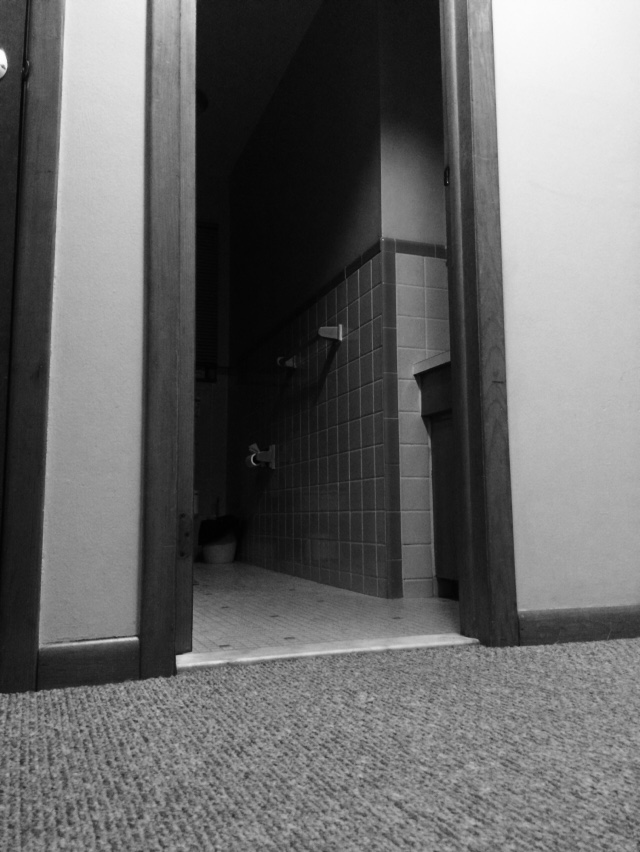 It was about 2 a.m. That’s my standard wake-up-in-the-middle-of-the-night time. I usually have to pee and spend about twenty minutes trying to ignore the urge so I can get back to sleep. It obviously doesn’t work and I end up getting up.

I hung my feet over the side until they reached the carpet and slowly sat erect. My head was still fuzzy and sleep filled. My husband was still fuzzy and sleep filled (actually he just snored on, unaware of my movement).  I stepped out into the hallway, which was oddly darker than usual.  I often leave a light on somewhere so that I don’t sustain serious injury during my nighttime revels. Apparently I hadn’t. I had my iPhone in my hand, so I tapped the screen for a little light as I tottered towards the bathroom. I heard something move. I stopped. All my senses were immediately alert and my brain clear from the fog of sleep.

“Timmy?” I murmured. He’s a heavy sleeper, so my soft frightened whimper would by no means rouse him. I didn’t really want to wake him. He works hard and deserves his rest. It was nothing anyway. Just the wind…right?

I took another step towards the bathroom. I peeked my head inside. My trembling hand reached for the light switch. The shades clattered. Shook. I jumped back towards the bedroom.

“Timmy!” I called. This time I was not muttering half hearted calls for his assistance. “Timmy get up there is something in the bathroom.”

Snort. Grumble. Mutter. Stir. “Whhaaat?” His response made it clear he was not awake. We sometimes have whole conversations while he is still in a state of half consciousness. I needed him awake now.

“Timmy get up!” I pleaded. “There is something in the bathroom and it’s freaking me out!”

Stir. Mutter. Groan. He sat up though, and his eyes were open. My valiant protector was awake. I swallowed and ventured towards the bathroom again. His words glided to me from behind, through a yawn, “What’s wrong babe?”

My heart beat in my throat. I flicked on my iPhone’s flashlight. Blue tinted light flooded the dark hallway. I stepped forward and directed the stream at the bathroom window.

Something leapt from behind the shade. It was about the size of a DVD case, unfortunately this DVD case had at least four more legs than you usually find attached to the average plastic container. I say at least four because it looked like it could have had eight, or was that a tail trailing behind it? It hit the toilet lid with a sickening thud and dropped to the floor, then flew across the tile, onto the hallway carpet, towards my feet, like it was pursued by Wile E. Coyote.

I screamed. I state the fact simply, but words would fail me to describe the horror and panic that billowed through my veins. I stumbled back towards my bedroom and the black thing surged on to take refuge in my husband’s “office” which is really no more than the family dump heap for things that don’t have a home.

“What’s happening?” and the like erupted from the bed behind me in the timbre of my husband’s voice. I barely had time to recover from my panic, and consider the horrors of seeking out the ghastly thing in that room-of-requirement/room-of-hidden-things-esque mess when I sat up in bed.

“Rachel are you okay?” My husband’s arms were wrapped around me. I was breathing hard and I was frightened and I was…still in bed?

“It was just a dream,” he murmured. His warm hands pulled my trembling form down beside him. He pressed his lips to my forehead and tucked me in.

He was asleep again, almost instantaneously. He’s actually calmed me from nightmares in his sleep. I have them so frequently that it became a reflex for him after about 3 months of marriage. I laid in bed, eyes wide open unable to sleep. You see…I had a problem…

I had to pee…and it was dark in the hallway…