It was around 6p.m. on August 7th, 2017. I was eating the chili I’d made, watching a soccer game with my husband, and the Braxton Hicks that I’ve been feeling all day are not going away with water and elevated feet. In fact, they were starting to hurt a little.

He put a spoonful of chili in his mouth and mumbled a “Hmph?”

“Maybe we should start timing these. They’re hurting a little.” Then I added hurriedly, “Not a lot. Just a little. Like a dull far away ache.” I was still 38 weeks pregnant and in prime false alarm territory. The last thing I wanted was to be “that pregnant lady,” waddling into the hospital at zilch centimeters dilated. Though I suppose I wouldn’t have seen the maternity nurses shaking their heads derisively at me when I waddled my way back out.

Tim just nodded at me as he opened up the contraction app. He’d downloaded it over a week before and had already been playing with it when I had bouts of Braxton Hicks. But those went away when I drank water and put my feet up. These…

After about an hour he says, “They’re coming 6 to 10 minutes apart for about 30 seconds each.” We looked at each other for a minute.

“It’s probably nothing,” I said.

“Maybe,” he replied, his eyes beginning to brighten with anticipation.

I chewed my lip, and said slowly, “but still, maybe we should finish packing the hospital bag. You know, just in case.”

Tim nodded and we set to work. I stayed mostly seated with my feet up, telling him when the “not” contractions started. At around 8 o’clock, I was beginning to panic. I was texting the midwives, trying to sound calm, hoping they weren’t judging me, because clearly this was just a false alarm. Really! I mean, they were getting more painful, and closer together, but it wasn’t real. Statistics show that most first time mothers are at least a week late.

I called up my mother-in-law. My voice was shaking. “Hey Mom? How much longer are you going to be at Ikea?” An hour away. I felt like an idiot.

“Well…I…I mean it could be nothing. But we’re timing them and they’re pretty regular. And they kinda hurt. Just a little! Not a lot. Like a mild period cramp.”

“Oh Rachel!” I can hear the excitement in her voice and it turns my stomach. My fear unclenches a little when she assures me they’ll come right home. Even if it’s a false alarm, I’ll feel better if she’s in the house.

Two Benadryl and several hours later, I’m laying on the sofa downstairs in legit pain. Too much pain to sleep through pain. My mother-in-law and my husband are packing the car. I fall into a rhythm that only measures time in “how far apart are they now” increments. Then I’m getting down into the back seat of the car to start the ride I’ve been dreading.

The ride itself was not that bad. My contractions were still around 5 minutes apart, which means that for a 45 minute ride, I only had to deal with 9 of them. It was the mental part that plagued me. I was still terrified it was a false alarm (a ridiculous fear at that point based on all available evidence). Or worse, that it wasn’t, but I’d show up there and the midwives would tell me that I was only 1 cm dilated despite my increasing pain level.

This was all I could think about as they checked me in. This was all I could think about as I waited for the midwives to come and assess me. It sent my blood pressure through the roof and lessened my chance of coming off the monitors for a water birth. The exhaustion of already being without sleep since 5 am the previous morning was taking its toll too. These two things combined made me ask for an epidural and decline a room with a birth tub. I didn’t have the energy to “ride the waves” much longer.

After being assessed, I was told I was in active labor. No one told me how far dilated I was, probably because I’d told them I was afraid of not being dilated enough. I later discovered I was 4 almost 5 cm. By the time the anesthesiologist came in I was nearly 7.

Once the epidural was in place, I dozed through the rest of labor, but didn’t really sleep. It was hard to drop off when I knew that soon I’d be meeting my baby. I’d predicted that all those music playlists people insisted I’d want during labor would go unused. I wanted one of the two things I always knew I’d want. So Tim set up a soccer game, and we waited to the music of whistled off-sides and the faint cursing of spectators picked up by the cameramen.

At about 2:23 pm they handed me my screaming baby girl. 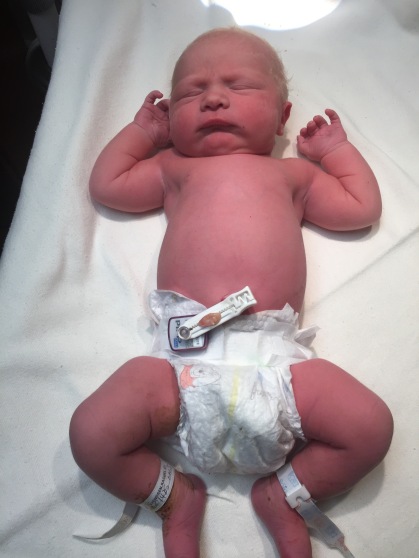 I don’t remember what I said when they gave her to me. I think I may have told her I loved her. I know I tried to sing to her, but I was crying too much. I do remember thinking how shocked I was that her head was lovely and round. I had been warned that vaginal births often gave way to alien shaped heads. I remember thinking that she was massive and I couldn’t believe this huge, tiny person had been inside me until a moment ago.

And I remember noticing her hair. It was blonde. Very blonde. Platinum blonde. Everyone who saw her in the hospital remarked on it. Don’t ask me how, because I wasn’t aware I had any blonde genes. My husband has them, sure, but we’re all brunettes in my family, and more dark brown than light. Only time will tell how much it will change and darken, but right now it’s a remarkable mystery to me.

As they wheeled me from the birthing room to our recovery room, I passed the desk with the check-in nurses. They smiled at me. I lifted the baby a little and said in a tired voice, “Well, it wasn’t a false alarm.”